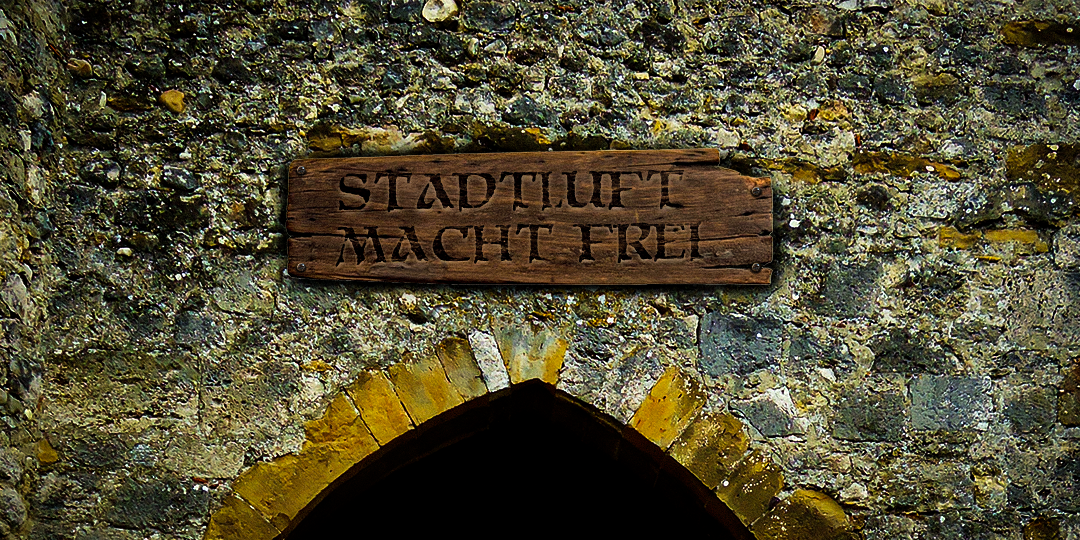 Charlotte D.
December 3, 2021
History
‘Stadtluft macht frei’ (‘City air makes you free’) is a popular German saying, referring to a principle of law in place in Europe during the Middle Ages. This one would enable a serf living unfree under feudalism to become free from their lord, in a city, after a period of one year and one day. This increased the migration of medieval people seeking freedom from the feudal territories to the cities from the 11th century onwards. Because of that freedom, cities became a centre of trade, gathering merchants, entertainers and much more, and offering a large variety of products and services. This made the cities vibrant and prosperous, with its inhabitants enjoying better life conditions than on the feudal territories.
Français
Español
Português

Manorialism was a feudal system of land ownership in place in parts of Europe, including in what would become Germany, during the Middle Ages. The lord who was often a member of the nobility, the bourgeoisie or of an ecclesiastical institution, was the direct owner of the land assets of his lordship. He lived in a large manor house with his family on his domain, from which he administered his rural estate, and the population of labourers who worked the land. Most of the people living and working on the land were serfs, or more precisely, villeins.

Villeins were allowed to hold property and to work the land, however, they were not free. Apart from paying a rent, they had to pay many taxes and fines to the lord that freemen were exempt from, in the form of labour services or an equivalent quantity in cash. For example, villeins had to pay a fine on the marriage of their daughters outside the manor, on the inheritance of a holding by a son, on having a child outside marriage etc. They also lacked freedom of movement as it was forbidden for them to leave the lord’s territory.

The city as a means of freedom

From the 11th century, as cities were growing, it became customary law that if a serf would live in a city for one year and one day, which was considered a significant amount of time throughout Europe at the time, this one would be free from his lord and couldn’t be reclaimed by him. Many serfs started to flee the feudal lands to gain freedom in the city, making cities, places outside the reach of the feudal system to some extent. Hence the expression ‘city air makes you free’.

Additionally, as they were seeking more freedom, the citizens of the city sometimes agreed to a ‘sworn union’. This means that in the event of a conflict with the lord of the city or with the local political powers, the inhabitants would gather and help each other.

The advantages of the city

The biggest city in Germany at the time was Cologne with 40,000 inhabitants. Of course, there were differences between them, and problems as well. For example, risks of fires were frequent as most houses were made of wood, roads were not paved, and it was quite dirty.

However, there were many positive aspects about cities that made them attractive to medieval people, such as weekly markets that provided the products that the inhabitants needed on a daily basis. They would take place on a square in the middle of the cities. The markets offered seasonal products as well as good-quality meat that the merchants would prepare in front of the people. There were fishes from the local rivers or from the sea and products like butter, cheese, spices, honey, which were very important in the Middle Ages. Besides food, there were goods necessary for transportation and conservation of food, metallic objects, potteries etc. The cities also had annual markets, specialized markets and later on, specialized indoor shops.

Additionally, cities were places of entertainment. There were fools and entertainers of all kinds. Some were jugglers, bear tamers, equestrian acrobats, funambulists, fencers. Though these practices were undesirable, there were fortune tellers, clairvoyants and magicians who would offer the public a thrill. Minstrels would play the violin, the flute, the tambourin etc., in the inns, in parties and fairs. Although entertainers would not only show their arts in cities, those had become their place par excellence. Tournaments with knight games were another popular entertainment in the cities.

Contrary to what one would think, the medieval society was quite mobile. Not only the nobility and the rich would travel, but also the merchants, craftsmen, lawyers, masters, messengers etc. This mobility increased through the Middle Ages and there was a high demand for hospitality. To answer this demand, inns were born in cities in the 11th and 12th centuries. Until the 14th century, there was no clear distinction between inns and taverns, they offered the same services. The inns were first located at the outskirts of cities and as they grew went more towards the centre.

A strong competition for immigration

The cities mainly attracted qualified workers, in other words, craftsmen that participated to growing the economy of the city. Many new citizens made a city attractive and dissuaded its neighbour competitors, notably the powerful territorial leaders to try to act against the city or against the expansion of its territory. That is why cities competed among themselves in matters of immigration and would adopt a more liberal admission policy. For example, the cities of Lunenburg, Hamburg and Frankfurt had more than 100 new residents per year by the end of the Middle Ages.

Some people also immigrated to cities in other countries. Around 1370, groups of German craftsmen settled for the first time in the Italian cities of Venice, Florence and Rome. German shoemakers mainly settled in Rome. Rome was a popular destination as it was an important place of pilgrimage, one of the most important in the European Middle Ages. Most of the bakers of the eternal city were also Germans, so that, when the German pilgrims would come to Rome, they could eat German bread and stay in German inns.

Although the principle of law ended in the 14th century, for three centuries, it was a way for many people to find freedom, and to have a better life outside the control of the feudal lords. Freedom brings economic prosperity which makes people’s life conditions better. This historical fact should be remembered and should inspire people nowadays to find more such ways to achieve freedom.