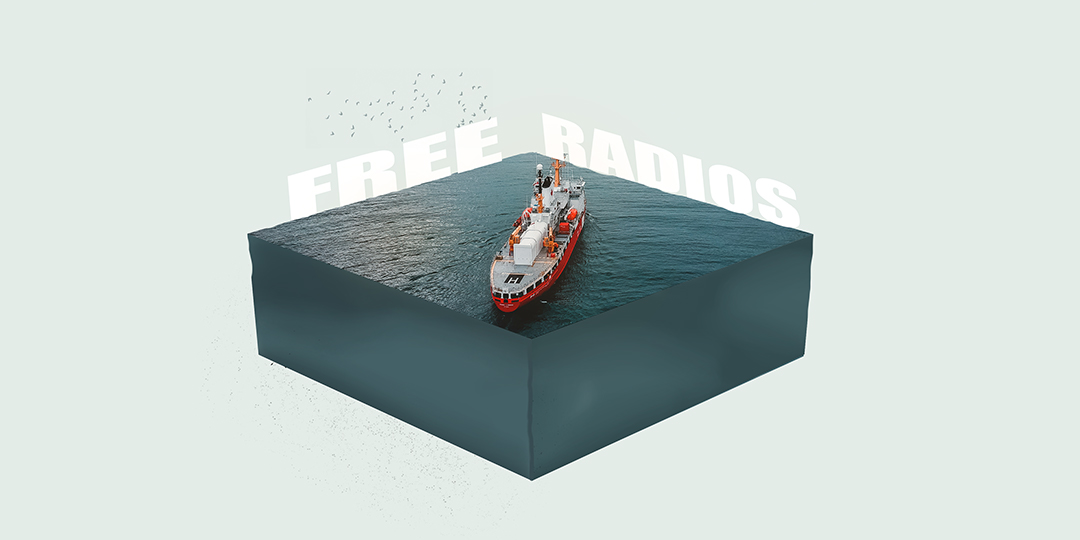 Charlotte D.
October 3, 2021
History
In the beginning of the 1960s, the British Broadcasting Corporation (BBC) had the monopoly of radio in the United Kingdom. In fact, apart from one commercial TV network, the airwaves were owned by the BBC. As it happens with any monopoly, because of the lack of competition, the broadcaster was not particularly interested in providing better quality services, and ones that would fit the demand of the British. Because of that, some people started their own radio stations broadcasting their programmes from boats located outside the British territorial waters. These were known as free (or pirate) radios.
Français
Español
Português

As rock ‘n’ roll and pop music were becoming increasingly popular in the United States, there was a growing public demand for this kind of music to be aired in the UK. However, the BBC who favoured news, information, light entertainments and children’s programs, did not meet that request. The only alternative for the British was Radio Luxembourg, which, apart from not airing rock and pop music as well, had a very poor medium wave reception as the station’s signal faded in and out. This demand could have easily been met by competition if it was not for Britain’s refusal to grant radio licenses to commercial broadcasters.

The Idea of Free Radios

A group of entrepreneurs and music enthusiasts decided to do something about it, and defied the authorities by taking old fishing ships to the sea and broadcasting programs from international waters, which was out of the authorities’ legal reach, and therefore did not make it illegal. This group included Ronan O’Rahilly, an Irish businessman who saw potential in Gordon McLendon’s Radio Atlanta which briefly broadcasted from a ship between May and July 1964. O’Rahilly acquired the business plan and used the blueprints to create his own Radio Caroline the same year. Don Pierson, another entrepreneur who was living in the United States, got the idea to launch his own Radio London after reading a report in The Dallas Morning News about the start of Radio Caroline and Radio Atlanta.

When they began broadcasting in the mid-60s, they had reached nearly half of the British population, giving their first exposure to some of the biggest bands of the period like The Rolling Stones.

The first major British pirate radio station was Radio Caroline. It started broadcasting from a ship named ‘Mi Amigo’ off the Essex coast in 1964. Radio Caroline soon became one of the most popular stations with an audience of one third the size of the BBCs in the parts of the country where the signal could be received.

But the most successful of them all was Radio London, often referred to as Big L. It is the radio station that influenced most changes in British broadcasting. Radio London used British presenters who adopted popular American broadcasting techniques. This was a turning point for the BBC, as they were confronted to serious competition for the first time and had to reconsider their broadcasting style.

In 1967, the British government, at the time, ran by the Labour Party, under some broad accusations towards pirate radio stations, passed the Marine Offences Act. This one made it illegal for a pirate ship to broadcast within the country’s territorial waters which extended three miles out from the coastline. Moreover, it also made illegal the servicing of those ships from any British port, and the advertising of those stations by British firms. The Marine Offences Act made it extremely difficult for free radios to continue in business. This law was simply a way for the government to defend their own monopolistic broadcasting institution, the BBC, which felt threatened by the success of those radios.

Eventually, it was revealed that the BBC had plotted against the pirate radios. Firstly, they would monitor their output and report anything controversial to politicians. Secondly, they had censored them by banning pirate radio presenters from appearing on the BBC and their own presenters could not even mention the free radios. And lastly, they had lobbied big performers of the time such as the Beatles and Cliff Richard, to embargo their own records on free stations. But the BBC went even further to defend the government’s interests, they conducted a research into the age profile of the free radios’ listeners to see how many had to age to vote as the Labour government was fearing a voter backlash if they were to shut them down. The pirate radios were publicly supporting the Conservatives as those were not opposing their activity unlike the Labour Party. Just as the government feared, the Conservatives won the Great London Council Elections in 1967.

In the end, the BBC withdrew from any open campaign against the free radios as they were afraid their own unpopularity would grow. What the government didn’t expect is that the Marine Offences Act, by shutting down most pirate radios, would create a migration of their skilled staff to the BBC. For instance, Dave Cash, who was the co-host of the Kenny and Cash Show on Radio Caroline was hired by the BBC and worked there until his death in 2016. Although he later admitted: ‘They hated us, but we didn’t care. And we still don’t! I take their money, but I still don’t care. And if you need a real pirate over there in America, I’m your man.’ This created a great change inside the BBC as the pirates succeeded in making the BBC to create their first pop music radio.

The Resurgence of Free Radios

Despite the Marine Offences Act, Radio Caroline continued broadcasting for a long time, defying the government’s ban. Of course, a law is not necessarily just and there is no guarantee that people will respect it. That was the case here.

Apart from Radio Caroline, in 1970, a new station called Radio North Sea International (RNI) gained popularity. For five years, it transmitted from the sea to Britain, Germany and the Netherlands.

The history of these radios was inspiring, as those pirates fought for freedom, against the government and its monopoly. They had become the free-market competition that would actually meet the demands of the British population at the time, providing them better-quality services that they actually wanted. People will always try to find ways to get their demands supplied.