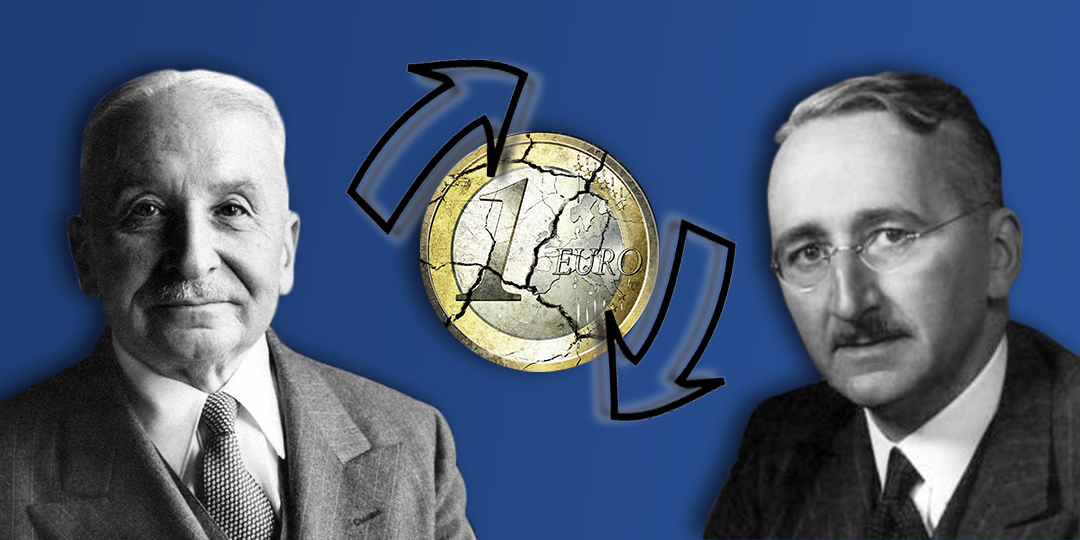 Antonios Giannakopoulos
January 9, 2022
Economics
After the financial crisis of 2008 the Austrian school of economics saw once again a resurgence in popularity both in public and the academia. This resulted from the fact that economists, financial analysts (Peter Schiff) and politicians (Ron Paul) that were familiar with the Austrian business cycle (ABCT) successfully applied it in predicting the boom and bust of the housing market. Today the theory gained popularity as people are looking for answers to high inflation, economic downturn, an extremely aggressive monetary policy pursued by central banks around the world. However even to this day the ABCT is widely misunderstood.
Français

The historic roots of the theory can be traced back to the publication of Mises The Theory of Money & Credit. What Mises did was incorporating capital theory developed by his mentor Eugen Von Böhm-Bawerk which up to this day remains a unique element that distinguishes it from other macroeconomic theories of boom and busts. Neoclassical economists treat capital(k) as a parameter rather than a variable. Similarly, during his debates with Keynes, Hayek found him (Keynes) ignorant of capital theory. ‘’He ignored the various stages of production, changes in capital value, took replacement of capital structure for granted and did not realize that ultimately the question faced by businessmen is not whether to invest in consumer goods or capital good but whether to invest in capital good that will yield consumer goods at a nearer or later date ‘’* the explanation of the boom that Keynes gave was simply that of ‘’animal spirits’’. Hayek during the latter part of the 1920’s introduced the now famous Hayekian triangle which were a graphical representation of the structure of production and the adjustments that take place in its capital structure. This take us to another unique aspect of the ABCT that is the time element, which is represented by the importance of the interest rate in order to allocate resources efficiently, it determines if production is going to be shifted for now or later as the economy becomes more capital intensive (capitalistic).  Savings by individuals get us sustainable healthy economic growth while artificial credit expansion by central banks plans the seeds for the boom and the bust. The following graphical representation shows us what happens to the market for loanable funds. 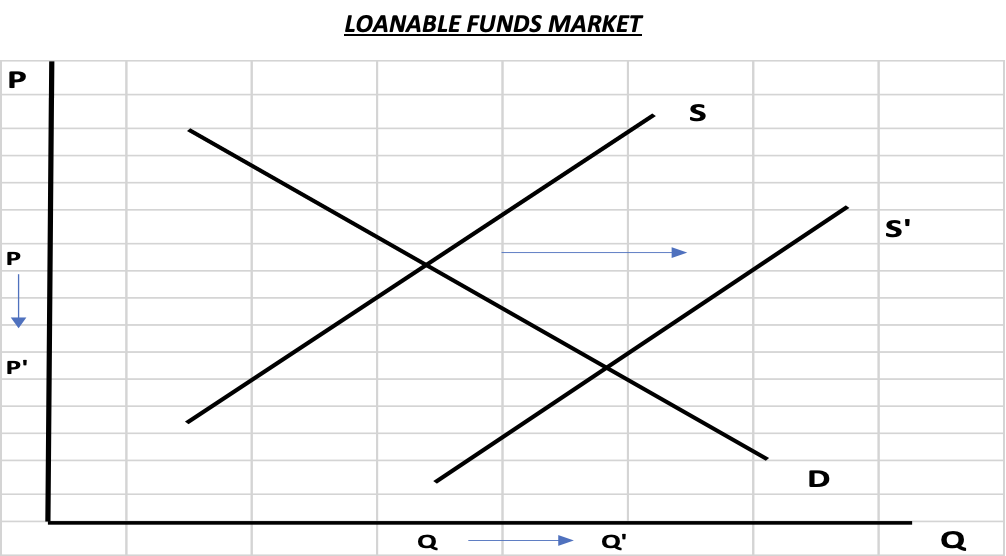 The new market clearing rate falls from P to P’. At this lower interest rate businesses are given the signal to invest in longer term projects buying more raw materials, hiring new workers, thus competition for new workers drives up wages, investors have been deceived as if there are more savings than they actually exist. During the boom phase workers are bid away from late stages of production into earlier stages as entrepreneurs assume that the supply of capital and the rate of interest will continue to exist in order to finish their projects in time. This creates new roundabout methods of production who will need additional investments over time. If this was the result of increased savings due to lower time preference then there are no problems the new structure of production could be sustained, however this shift is due to inflationary credit. This means that the materials of production and the labor have not increased, all that has increased is money in circulation.

But the expansion of credit cannot go indefinitely, we know that the success of investments depends on the future development of capital markets and the real rate of interest*. The artificial lower interest rate that produced the boom soon gives away to a higher real rate of interest*. Credit becomes scarce and entrepreneurs that have been overcommitted bid against one another for the increasingly scarce resources, bankruptcies are now the result, the increase money in aggregate does not necessarily mean an increase in incomes (in real terms) but likely a decrease of real incomes to consumers, as explained by the Cantillon effect. The boom has led to distortions in both the price and production system, higher orders of production have been wasted proving that the boom was a period of malinvestments. 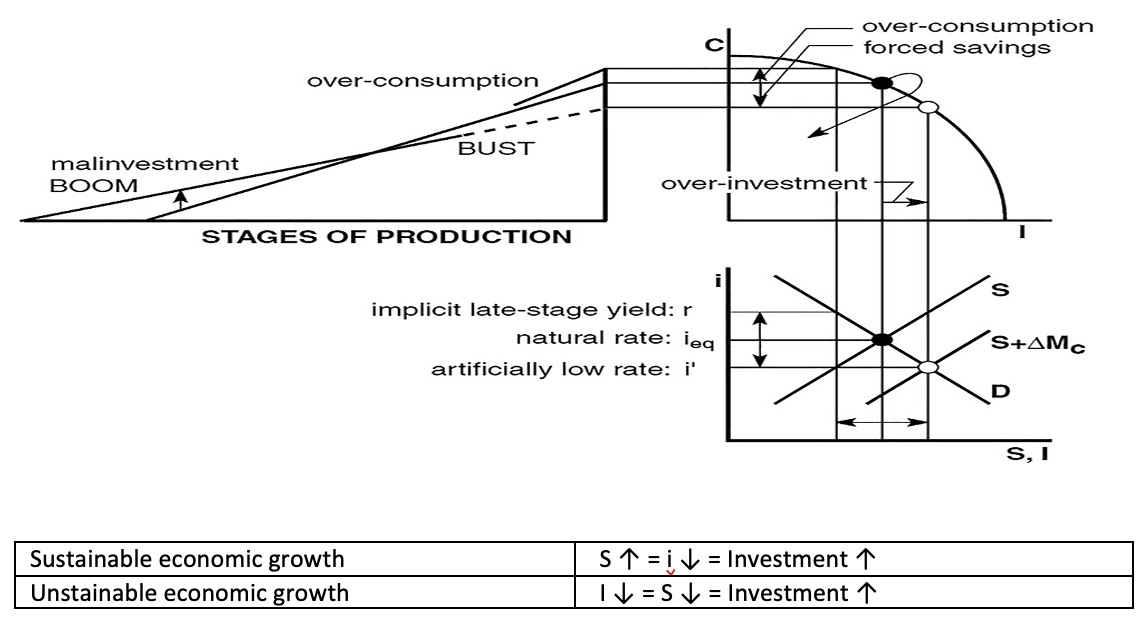 The bust phase is followed by liquidation of capital assets and the market trying to restructure its capital imbalances to fit those of real consumer preferences, workers are laid off increasing unemployment meaning lower incomes and falling aggregate demand. Thus, we get a recession which is nothing else than the market’s attempt at trying to bring its production more in line with consumer preferences.

A common criticism of the ABCT is the question of why entrepreneurs even the successful ones, are easily fooled by the credit expansion and can’t predict the bust. However, it is important to know that businesses in some sectors have no way of realizing that the increase in demand for the products in the later stages of production was caused by credit expansion. The theory also heavily emphasizes the role of the interest rate when it is manipulated by central banks it leads to an increase of the nominal money supply then the signals diverge from that of the preferences of consumers. Entrepreneurs do not know with absolute certainty that the lower interest rate was caused by monetary expansion

Finally, the ABCT is not a theory of overinvestment but as Mises pointed out of inappropriate investment ‘’ The essence of credit-expansion boom is not overinvestment but investment in the wrong lines i.e., malinvestment their projects are unrealizable on account of the insufficient supply of capital goods. The unavoidable end of credit expansion makes the faults committed visible ‘’ Investments were diverted to projects that were unprofitable (Costs higher than selling prices). So, what we have is overproduction of specific goods and underproduction of others

‘’The Austrian theory of the trade cycle ‘’ Edited by Richard Ebeling

‘’ Time and Money: The Macroeconomics of Capital Structure ‘’ Roger Garrison