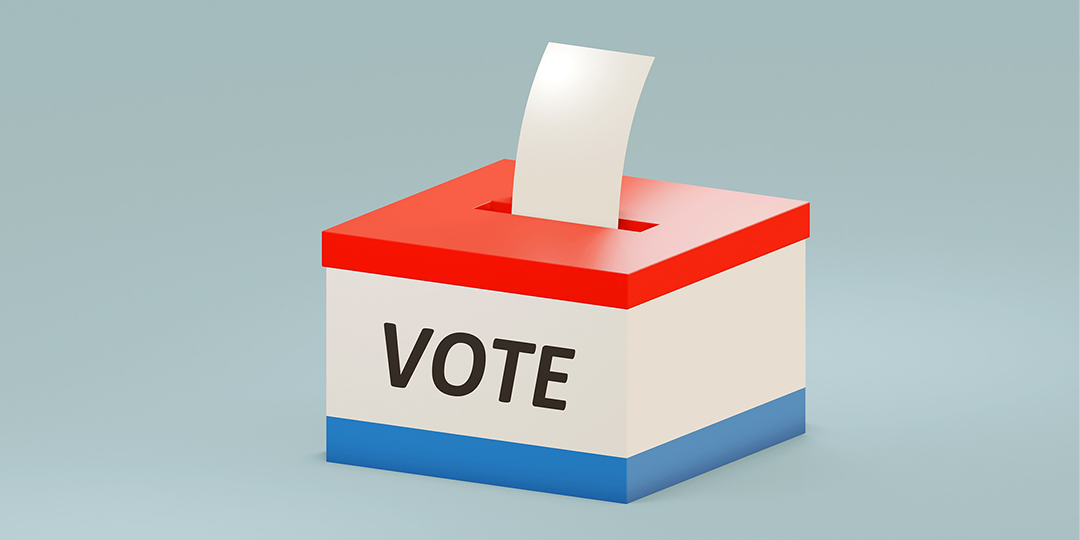 French Elections: The Illusion of Democracy

Charlotte D.
May 16, 2022
Politics
The French presidential election happened a few weeks ago and the results were no surprise to myself nor to many people. From the first round, it was clear that the left-wing Emmanuel Macron would once again win and be the president of France for a second term. Those who have been following the situation in France over the last five years know this result can only be tragic for France’s future in terms of freedom. However, I thought it was important, in this context, to discuss the notion of democracy, that is always being praised in France, particularly by politicians, and what the figures of this French presidential election reveal about it. By the end of this article, it will be clear to you why France is not a democracy and why democracies are doomed to fail.
Français

Representative Democracy is not Democracy

My first point is France is not a democracy in the strict sense of the term. ‘Democracy’ comes from the Greek word ‘Demos’ which means people. It is a political system in which all citizens participate to the public decisions and the political life of the city. In practice, it meant all people had to vote regarding a certain matter and the majority would determine the outcome.

However, France is a representative democracy, which means people do not vote directly on public matters, but instead, vote for politicians who will hold a place at the government and are supposed to represent their position. The politician who gets more popular votes then stays on power for a certain number of years.

In practice, beyond the pre-election promises of politicians, guarantees nothing that they will stick to what they promised and that they will defend their electors’ ideas and opinions on the matters of society. This is actually very often the case and many people who vote for a certain candidate who deceives them in order to reach power often get disappointed and angry throughout the candidate’s term. Recently, this was the case with president François Hollande, as well as with Emmanuel Macron.

The Real Results of the First Round

My second point is if we analyse the statistics of the first round of the presidential elections and stick to the actual principle of democracy, no candidate would win. In fact, the abstention of the French (the people who chose not to vote for anyone) beats Macron’s result by 6 points, 26% and 20% respectively. 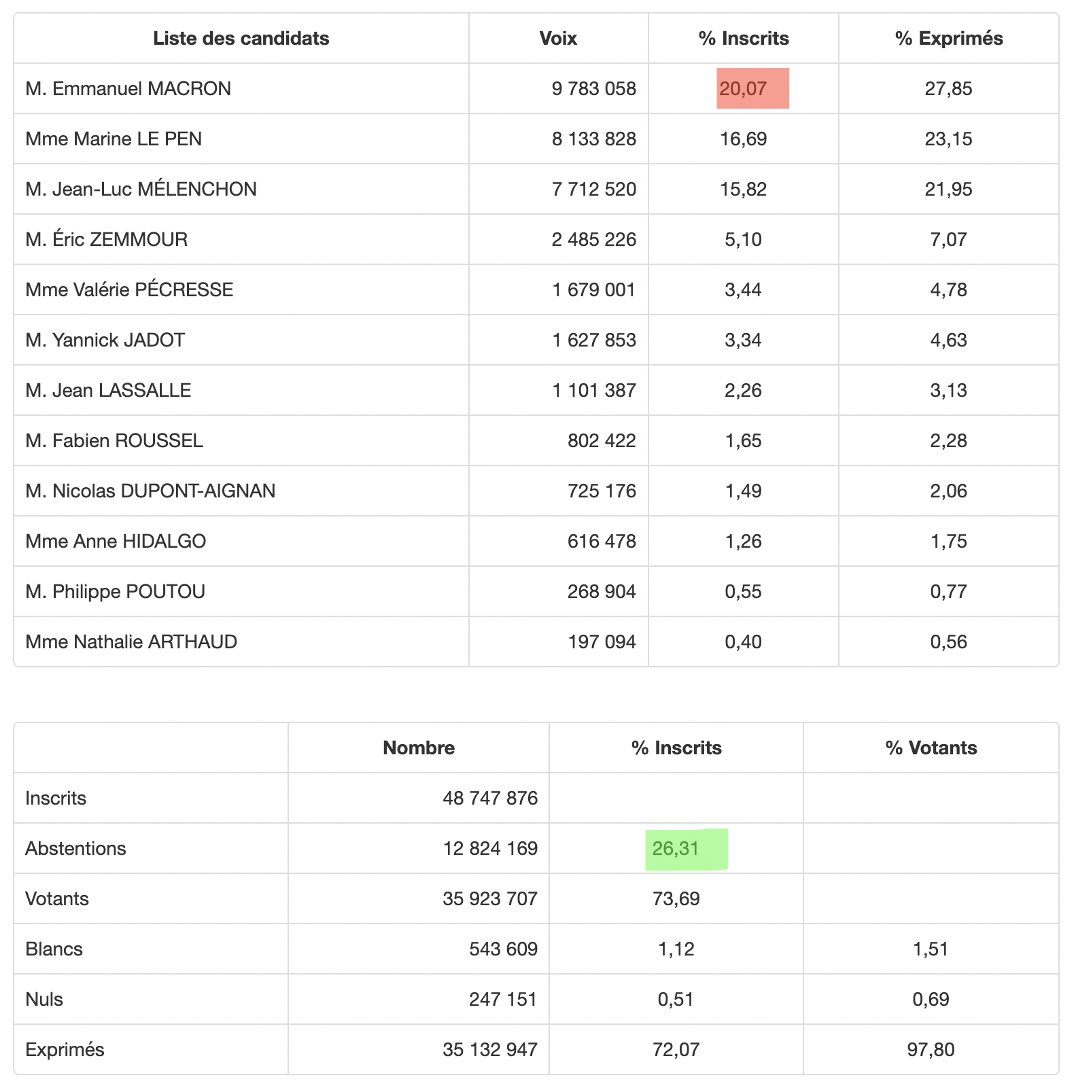 Therefore, if democracy was applied in this election, there would simply be no president at all, as the abstentionist majority of the French voted against all candidates. Of course, this fact is ignored as it would undermine the ruling class who wants to get its hands on power.

My third point is Macron’s electorate is quite specific, it is constituted of the elites and of baby boomers that make up half of it as can be seen on these statistics. 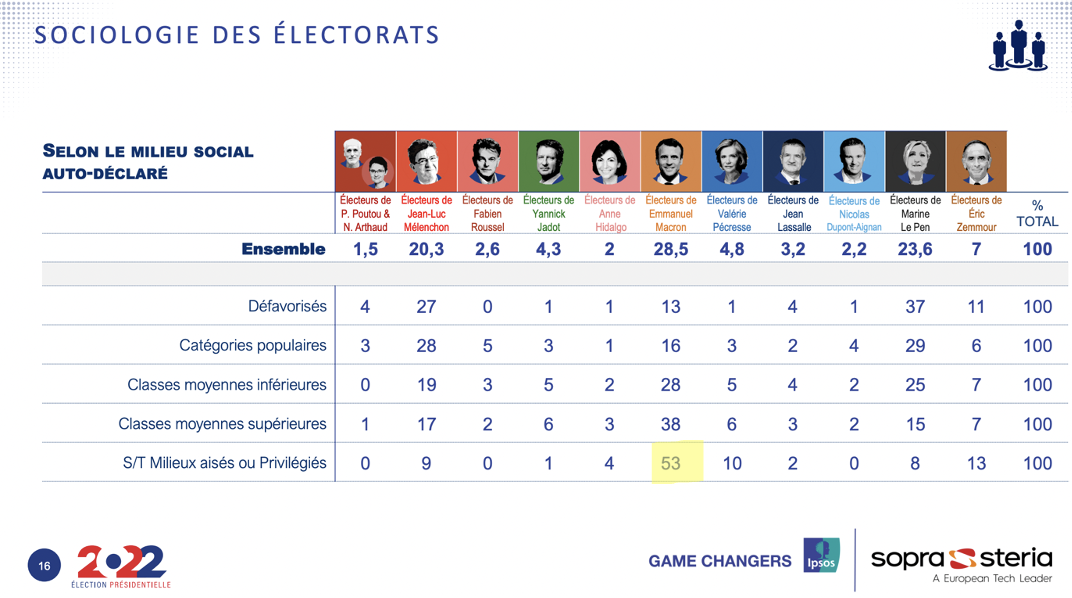 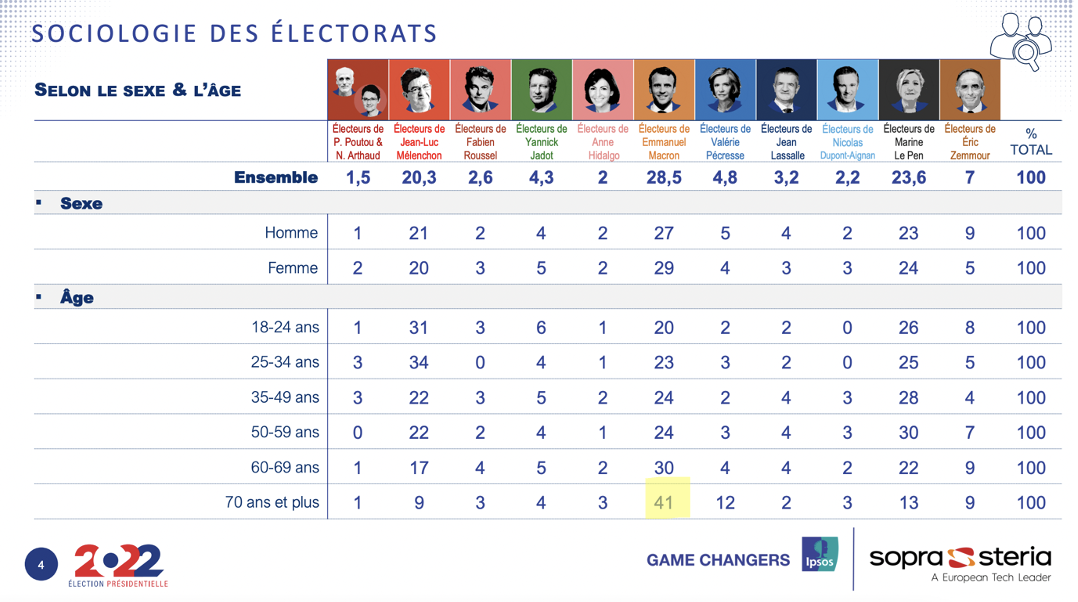 As Hans Herman Hoppe put it in his book Democracy the God that failed:

‘Rich men still exist today, but more frequently than not they owe their fortune now directly or indirectly to the state. Hence, they are often more dependent on the state’s continued favors more than people of far lesser wealth. They are typically no longer the heads of long established leading families but nouveaux riches. Their conduct is not marked by special virtue, dignity, or taste but is a reflection of the same proletarian mass-culture of present-orientedness, opportunism, and hedonism that the rich now share with everyone else; consequently, their opinions carry no more weight in public opinion than anyone else’s.’

We can see Macron hardly represents the average French but he will tend to favour the elites who got him elected with taxpayers’ money or through certain regulations. Let us not forget that when he was the minister of economy under François Hollande between 2014 and 2016, he did use taxpayers’ money (An amount of 150 000€) which was meant to be used for professional purposes, to organise private dinners with the elites of French society (actors, TV hosts, singers etc.) in order to become more influent and to gain power, which he obtained by becoming president in 2017.

Democracy, the God that fails over and over again

My fourth and final point is that democracy in the strict sense of the term is essentially a tyranny of the majority.

For example, if there five people including me on an island and four of them decide to eat me. As per the vote they constitute a majority and therefore win a democratic vote. Is it right? Of course not, because they are violating the private property of my own body. But this does not matter under democracy, while the majority decides it, that is the whole problem of this system.

As Lysander Spooner put it in his composition No Treason:

‘To say that majorities, as such, have a right to rule minorities, is equivalent to saying that minorities have, and ought to have, no rights, except such as majorities please to allow them.’

As for representative democracy, as Spooner puts is, it is indeed a form of slavery:

‘A man is none the less a slave because he is allowed to choose a new master once in a term of years. Neither are a people any the less slaves because permitted periodically to choose new masters. What makes them slaves is the fact that they now are, and are always hereafter to be, in the hands of men whose power over them is, and always is to be, absolute and irresponsible.’

So let us not be fooled by thinking democracy is fair and that we should endure whatever some tyrants at the government have in their minds and wait for another five years. Let us, instead, continue spreading the ideas of liberty and opening the eyes of people as to what democracy really is, and to the fact they certainly do not need the government to live well.