Socialism is not about efficiency

Lucas Nunes
January 23, 2021
Economics
Socialism is about ‘social justice’, or, to use better words, ‘socialist justice’. It is not about building a prosperous society or minimising conflicts amongst individuals.
Français
Português

Socialists, essentially, want to take control of the means of production and want to create a huge state that will have absolute control of every aspect of the society, through that state, they want to push equality, as this is what they believe is fair. The defenders of this system do not care about prosperity, humanity or life quality (even if they say they do, most part of the times, in democracies, to gain votes to achieve power). Their only goal is to implement their socialist justice system, regardless of the consequences that such system will cause. The planned economy and planned society of socialism does not seek to improve the life of human beings; it is a tool to implement the socialist justice, whose core is egalitarianism.

Utilitarianism, on its traditional concept of greater good, is a flawed concept, in truth, value is subjective to each individual. What is better for you, might not be better for someone else, but let us consider prosperity as the base for utilitarianism, as most of the people seem to have this concept: The higher the prosperity, the better. Through a utilitarian perspective, socialism has failed in dozens of nations where it was implanted, like Cambodia, Venezuela, Soviet Russia, Cuba, Iran, North Korea, Eastern Germany, China, Vietnam, Romania, Yugoslavia etc.

But the world we live in is not black or white, it is full of nuances, and we can also observe that the more a country starts to adopt socialist measures, that means, government interventions in the economy instead of a market oriented economy, the poorer this society becomes. Even if GDP is not a perfect formula, as it considers government spending in it, let us take the GDP per capita (PPP), as it will give us some better understanding of how much money would be needed to buy the same items in two different countries. We will analyse two neighbour countries in the European continent for this example: 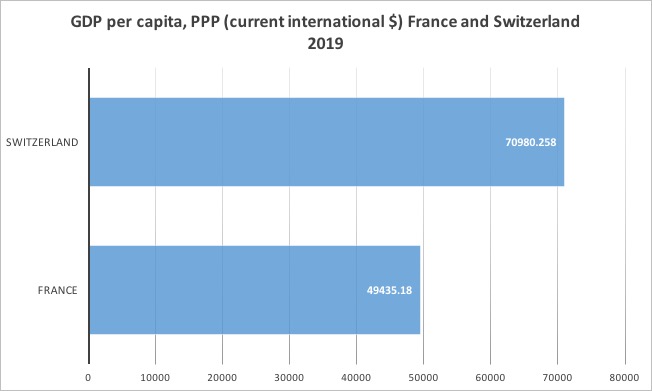 France is poorer than its neighbour, Switzerland, when we observe both countries’ GDP per capita (PPP). Another analysis that can be made is the Overall Economic Freedom between France and Switzerland. France is a much less market-oriented country than Switzerland is. That means that the bureaucrats, lawmakers and technocrats have more power to interfere in the economic production in France than in Switzerland, making France poorer and less efficient than Switzerland. 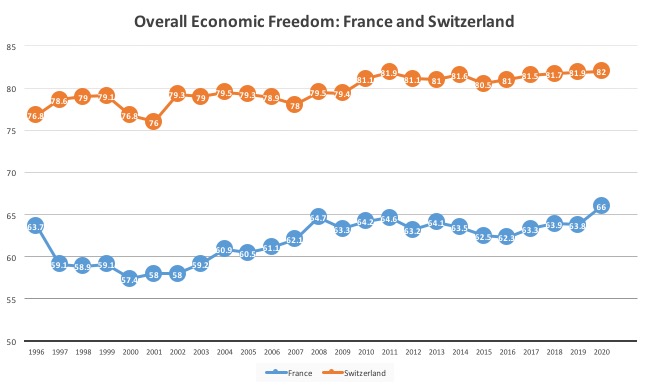 The socialist system was never set up for a better efficiency, to increase the prosperity of individuals or to reduce conflicts. It was always about implementing this justice system in which people will not have different ‘social classes’ where workers will not be ‘oppressed’ (according to the subjective socialist thinking) by the ‘bourgeoisie’, the owners of the means of production – even if to implement that, constant oppression is necessary.

The Myth of Inequality

Socialists created this mantra that is repeated over and over again about inequality being the issue of everything. They have always ignored that the world became a less miserable place and that people started to live better since the advent of the market-economy. They have always considered the economy to be a zero-sum game, in which one person needs to lose for another one to gain and that the only fair thing to do is to divide this cake evenly – a big mistake. In fact, the economy is not a cake with a limited size: It is a cake whose batter grows or shrinks, once we produce more of the cake batter or once we destroy more of the it.

To make the cake to grow bigger we have to produce more goods and services that are useful for us. The utility, as stated above, is subjective, not objective, as people have different needs, that are temporal, and a market-economy is the best way to grow this cake batter. With a market-economy, the cake grows, and, as a consequence, more people are able to have more of the cake, even if it is not evenly divided. That means: In a market oriented economy, there will be poor people and wealthy people, but the difference is that the poor will have more quantity of the cake and so will have the rich. In a more socialist economic model, with lesser economic freedom, the cake batter will shrink and the cake will be divided more evenly, but all the people will end up having less quantity of the cake, therefore, being poorer.

To visualise better the idea, observe the following chart with two hypothetical societies: 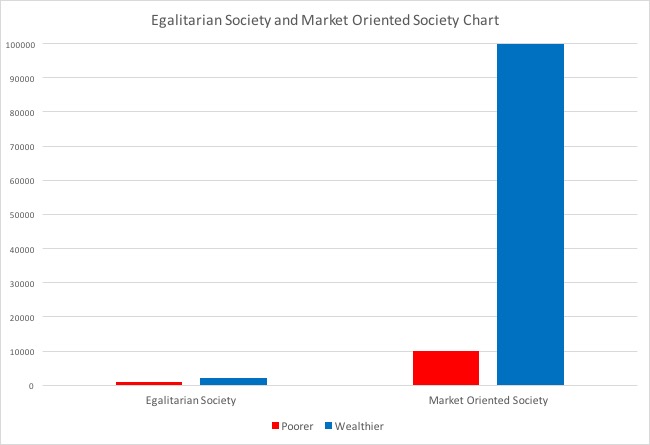 Income inequality is not related to poverty and that can be proved when we observe at the Gini index, the measure used for economic inequality, to analyse that. The lower the Gini coefficient, the more income equality the citizens of a country have regarding their wages.
Gini index measures the extent to which the distribution of income among individuals or households within an economy deviates from a perfectly equal distribution. A Gini index of 0 represents perfect equality and a Gini index of 100 represents perfect inequality.

According to 2016’s data by the World Bank, Ukraine (25) was the most equal country in Europe, but it was also one of Europe’s poorest nations. The United States (41.1) is almost as equal as Iran (40) and Turkey (41.9), but the American citizens are far wealthier than the average Turkish or the average Iranian. Liberia (35.3), another of the world’s poorest nations, is nearly as equal as the United Kingdom (34.8). 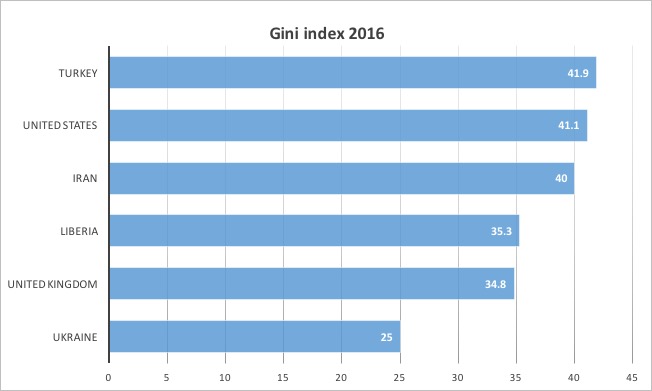 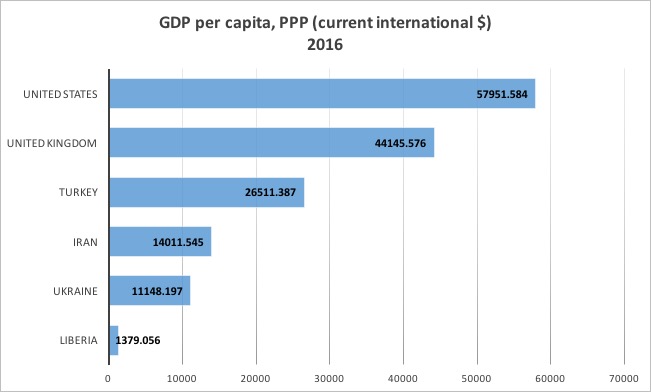 Analysing this data, we can observe that prosperity is about the amount of wealth being produced in a country, not about distributing evenly the wealth or having equal wages. And that is something that socialists ignore. In the socialist mentality, it is more important to achieve the ideal of socialist justice, than to tackle poverty to increase the life quality of individuals.

The Dark Side of the Socialist Justice

Socialist justice is about imposing a centrally planned society where everybody will be equal (even if that is not even possible to be achieved), regardless of the outcome or the means necessary to reach this end. Historically, we have seen that even genocides are justified to impose this totalitarian system. Karl Marx, one of the main thinkers of the socialist ideology, believed that a class conflict was necessary to implement such system. Figures like Lenin, Pol Pot, Stalin, Fidel Castro, Mao and several other socialist figures did not mind exterminating millions of people to achieve that.

Going back to the efficiency of those societies under those socialist regimes, we can see that they starved their populations, lowered their life standards, in comparison to non-socialist nations, locked them inside the countries so they couldn’t escape and made them to live in constant fear and surveillance (we shall never forget the Berlin wall and people constantly trying to escape from Eastern Germany).

In Soviet Russia, as it happens in nowadays Venezuela and Cuba, empty shelves in the supermarkets and scarce products is part of the reality. At the same time, the ruling class, often lives with a lot of luxury. How can we forget about the Rolexes of Fidel Castro, the supercars owned by the North Korean supreme leaders or the privileges enjoyed by Nicolas Maduro and his family? Equality for thee, but not for me.

Our current societies are not the free-market ideal, but they are still market oriented. That means, we are relatively free to exchange and to produce what we want, to serve one another (as we are the market) and that production choices are not being made by politicians, bureaucrats or technocrats – even though they interfere much more today than they did 100 years ago in many of the western countries. The more market-oriented our societies are, the more we are free to serve one another, exchanging goods that we produce or the services that we can make.

Countries that have a more market oriented economy have plenty of diversity of products, accessible goods and will not face daily shortages. People living in those freer societies enjoy much more comfortable lives than people living under socialist economies or economies that are less market oriented.