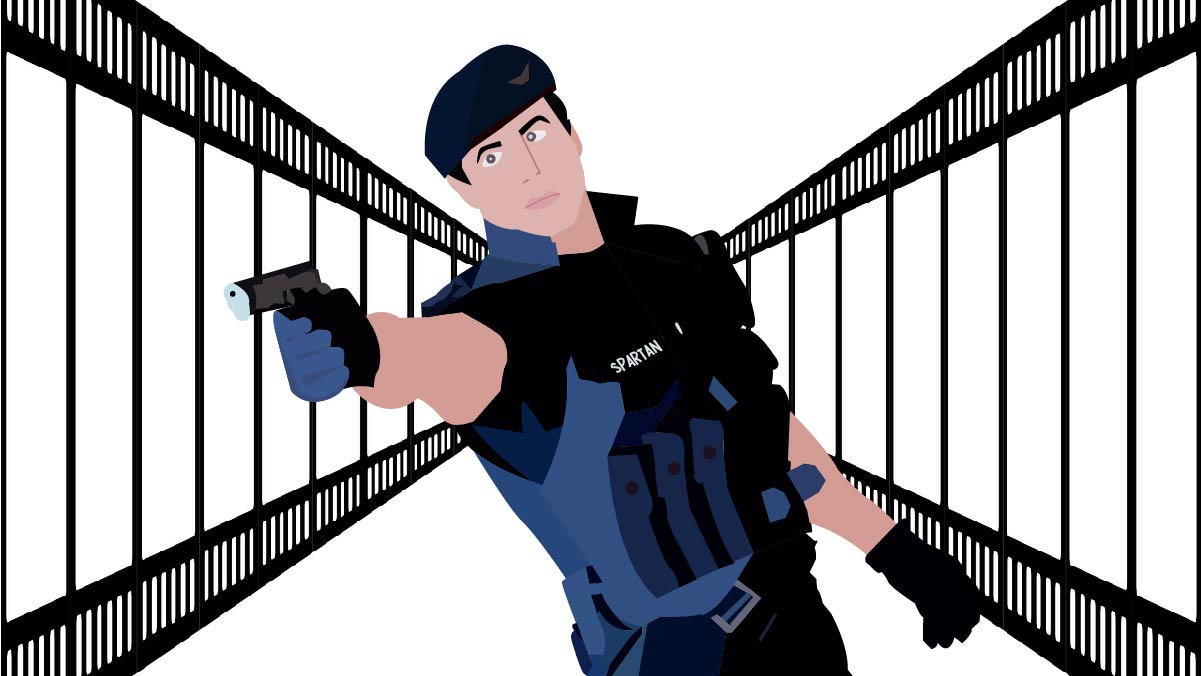 Charlotte D.
June 30, 2021
Cinema
‘Demolition Man’ is an American science fiction action film released in 1993. The plot revolves around former policeman John Spartan who discovers, instead of the Los Angeles he knew, the utopia of San Angeles and uncovers it as being an anti-freedom, prohibitive and controlling authoritarian regime.
Français
Español
Português

The story begins in 1996, introducing the story’s main character, LAPD sergeant John Spartan; called ‘the demolition man’ because of the large collateral damage he often causes during his arrests. Spartan is on the verge of capturing Simon Phoenix, a dangerous criminal. But Phoenix sets Spartan up, making it look like Spartan is responsible for killing hostages. Consequently, both are sentenced to long sentences in the city’s new ‘California Cryo-Penitentiary’, a prison in which convicts are cryogenically frozen and exposed to subliminal rehabilitation techniques.

36 years later, Los Angeles is now San Angeles; a megalopolis formed from the merger of Los Angeles, San Diego and Santa Barbara. San Angeles is presented as a peaceful city where crime has been eradicated thanks to its new regime and Dr Cocteau; its leader. However, appearances can be deceiving.

When Phoenix is able to escape as the result of a supposed mistake, the only solution the new and considerably weaker police department is able to find for such a dangerous individual is to also free Spartan, ‘an old school cop for an old school criminal’. Teaming up with Lenina Huxley, a police officer from this new department, Spartan begins hunting down Phoenix again. While doing so, he realizes the regime is far from perfect, on the contrary, it is full of liberticide policies aiming at total control of people’s actions and minds. The next points will be discussing more in details the real features of this authoritarian regime, which are actually increasingly present in our current societies.

It is not a mere coincidence to have chosen ‘Lenina Huxley’ as the name of one of the main characters of the story. Indeed, there is on one side a clear historical reference to Vladimir Lenin, and on the other to Aldous Huxley, author of the dystopian novel ‘Brave New World’. The reference to Lenin is meant to point out that the society of San Angeles is a socialist ideal, just like the USRR was. About ‘Brave New World’, many similarities can be found between the novel and the film. Both societies are ruled by a single individual at the top who decides everything, and shapes the society according to his ideals in an oppressive manner. Both societies have an obsession with health and babies made in laboratories. In both societies, pro-freedom individuals who condemn the regime are completely excluded from society and live in a primitive way.

One of the first things Spartan encounters in San Angeles is severe censorship. Indeed, a ‘Verbal morality statute’ was implemented by the government, and as a consequence, there are machines, in all public spaces, that detect whenever someone uses ‘bad language’ and fine them for it.

It is quite similar to the ‘hate speech’ policies that our own governments have been implementing in the recent years, that notably trigger a large amount of censorship on social media.

The fact people are fined units of credit by the machines reveals that this society is based on a social credit system. The government has full control of the monetary system and it is a tool that enables it to put even more pressure on people to follow the ‘rules’

Such system is no longer fictitious as it has been, for example, implemented by the CCP in China. Individuals that do not comply with government policies can simply be banned from society or certain areas of it by being prevented to buy, sell or exchange.

After being released from the cryo-penitentiary, Spartan asks for a cigarette and Lenina Huxley tells him that ‘Everything that is not good for you is illegal’, that includes: cigarettes, alcohol, meat, guns, gasoline, having children without a licence etc. People are basically infantilized, they can’t choose for themselves anymore, the government experts do.

It is certainly something we have seen happening in the West for a few decades. Guns are already prohibited in many countries, and more and more restrictions are being implemented by the government on cigarettes and alcohol, for example, both at the edge of getting banned as well. Regarding meat, the vegan and climate change agendas are being pushed more than ever, its activists suggesting meat should be banned for animal protection and a supposedly manmade climate change.

Physical contact is also restricted because of health risks related to germs and the risk of sexually transmitted diseases. Consequently, gestures like handshaking and kissing are forbidden. Sexual acts are also prohibited and have been replaced by virtual reality sex. Children are, therefore, all made through laboratory procreation.

These government physical contact restrictions are strangely similar to the Covid policies of social distancing that governments have been imposing worldwide since the beginning of 2020.

Of course, the majority of these people living in constant indoctrination does not notice anything wrong, on the contrary. Dr Cocteau, San Angeles’ ‘supreme leader’ is seen as the saviour that created a peaceful environment, incomparable to the chaos and brutality that existed in the area before the regime. The control Cocteau has over people’s minds is so strong that people do not question his authority and simply obey, just like robots that are programmed, this is indeed emphasized by the fact people answer ‘info assimilated’ once they are being told something. People became so weak to the extent that even the police department doesn’t know how to solve an actual murder or handle violence. Chasing people for foolish reasons such as breaking the curfew and ‘bad language’ violations made them weaker, which is why they have to get Spartan’s help although he’s the archetype of the toxic masculinity they despise.

This is another characteristic that can be found increasingly in our modern societies, most people tend to simply obey and comply to whatever the government says because the government is the authority, regardless of how unjust and criminal their policies might be.

In the end, it is all about Cocteau increasing his own power and control over the population of San Angeles, just like it is the case with the politicians of each of our governments.

Even though people can still go the restaurant, the society does not have a free market, but rather some kind of fascist corporatism where only one chain of restaurants; ‘Taco Bell’, remained and is under the control of the government.

This greed for power and control is also visible in policies such as inserting microchips in people’s hands to track them at any time, and in the way, Cocteau hunts dissidents who oppose his regime and, therefore, jeopardize his power.

Indeed, it is later revealed that he was the one freeing Simon Phoenix in order to get Edgar Friendly, the leader of a rebellion for freedom, killed.

‘According to Cocteau’s plan, I’m the enemy because I like to think, to read, I’m into freedom of speech and choice. I’m the kind of guy who likes to sit in a greasy spoon and wonder: should I have steak or jumbo barbecued ribs with gravy fries? […] Up top, you live Cocteau’s way. What he wants, when he wants, how he wants’

Edgar Friendly and his followers, although living in poor conditions, enjoy more freedom than the people under Cocteau’s regime. For example, they can make themselves burgers if they want to, although they are made of rat meat. The most inspiring part of the movie is probably Friendly’s monologue in which he defends freedom of speech and choice.

This film, in the 90’s, accurately predicted how the future of society would be 30 years later with the advancement of the socialist agenda. A dystopia turned into reality. However, as the movie shows, while there are individuals willing to defend freedom, there is still hope for a free society.

‘Demolition Man’ is currently available to watch on Netflix as well as to buy/rent on Amazon prime video.